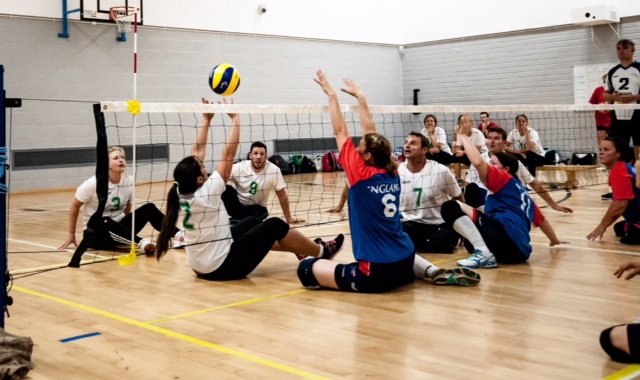 Sitting volleyball is one of the most exciting and skilful adapted sports. It is fun, social and challenging and is one of the very few sports that brings together disabled and able-bodied participants, making it truly inclusive. It replicates the indoor game but is played on a smaller court with a lower net and participants sit on the floor (not in wheelchairs) to play. Top sporting events, such as the Paralympics and Invictus Games (a Paralympic-style event for wounded, injured and sick members of the Armed Forces) have placed a spotlight on sitting volleyball but there are currently only around 12 clubs within the UK. So, what are we doing across Hampshire to develop sitting volleyball?

The story so far

In order to make sitting volleyball sustainable it is necessary first to raise its profile through a campaign of awareness. We hope that increasing participation through ‘come and try’ sessions will lead to greater numbers staying with the sport and the creation of more clubs. We already have a good track record in delivering successful events. In July 2015, for example, five teams competed in the sitting volleyball cup at Crestwood College and in 2016 we launched a mini-league that was contested over two meetings, in April and October. Since December 2016, a series of taster sessions have been delivered in schools across Hampshire with approximately 400 students having participated to date. A sitting volleyball workshop was delivered in March 2017 with the hope that it will inspire attendees to deliver grassroots sitting volleyball across the county.

What is on offer?

There is currently one established sitting team in the county (South Hants SVC – see below) but a new club has started, at The Hub in Bishopstoke Road, Eastleigh. It trains every Tuesday from 7pm to 8pm and the first session is free. If you are thinking about creating a sitting volleyball club, want to deliver grassroots sitting volleyball, or just want to get a taste of the sport then you may be interested in the following:

In Portsmouth we have an active club that welcomes players of all standards who are 14+ years. The club is affiliated to South Hants Volleyball Club and is part of a nationwide network of sitting volleyball clubs supported by Volleyball England.

Training sessions are held every Monday between 7pm and 9pm at the Harbour School, Tipner Lane, Portsmouth PO2 8RA. The first session is free and £3 thereafter.